The Hall of Justice, constructed in 1925 in the Beaux Arts style, was the nation’s first consolidated judicial facility. In 1994, as a result of the Northridge earthquake, the building sustained severe structural damage and remained vacant until 2012, when restoration began.

Together with Clark Construction and Levin & Associates Architects, EverGreene conserved historic features throughout the Hall of Justice including the wood, metal and bronze doors at the entrances and elevators, iron stair rails, bronze casement windows commemorative plaques, a historic mail box and radiator grills. We reinstated historic decorative painted and glazed finishes, including stenciling and faux bois on the interior doors.

EverGreene’s craftsmen prepared, skim coated and painted the plaster ceilings in the four historic staircases… and repaired, restored and repainted the flat and ornamental plaster in the eighth floor jury room and coffered groin-vault lobby ceiling. Glass panels in the transoms and elevator sidelights were salvaged, cleaned, and replaced where necessary with historically accurate glass.

The Los Angeles Hall of Justice was rededicated and reopened on October 7, 2014 and is now occupied by the LA County Sheriff and District Attorney. 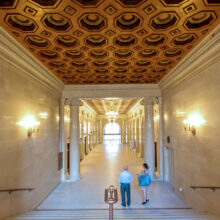 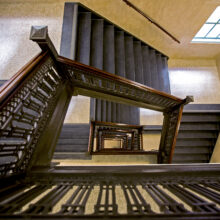 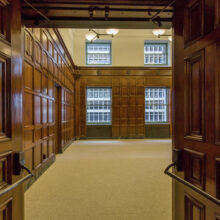 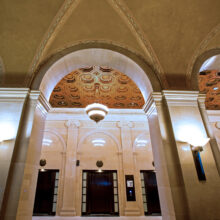 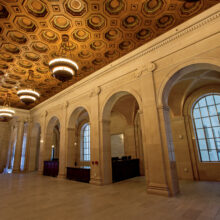 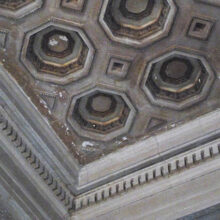 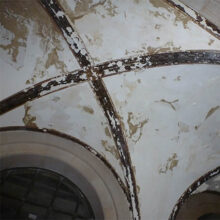