Columbia University has in its wide and varied art collection two small clay figures from the Chinese Han Dynasty (206 BC–220 AD). The paired male and female figures are modeled schematically and may have been originally provided with fabric clothing. Neither retains its arms but this does not detract from the delicate modeling of the faces and figures.

Both figures were damaged by a fall that resulted in several breaks in the legs and female figure’s hair. The breaks revealed that the clay forms had been originally assembled over small clay pins that held the thin forms of the hair tail and legs together. These had broken along with the surrounding clay bodies.

Our conservators carefully drilled out the original clay pins at the breaks and replaced them with stainless steel dowels. The fragments were reassembled in their original locations and held in place with a reversible adhesive. Losses were filled with an inert water-soluble filler that was in-painted to match the clay colors when dry. Fills and in-painting were limited to areas of loss only. The finished figures were remounted on their stands and then returned to storage. 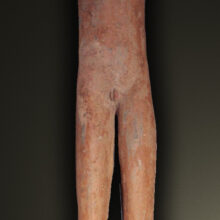 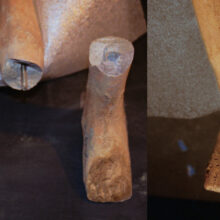