Henry George was an American philosopher and economic theorist of the late 19th Century. Although little known today, his theories advocated an unusual blend of social welfare and free market capitalism. Unlike Marx and other mid-19th century theorists who believed wealth was produced by labor and controlled by capital, he believed wealth was derived primarily from land. He felt that land should be jointly held and taxed at a rate commensurate with its productive value while other taxes on economic activity be eliminated. His ideas were taken up in Britain and implemented to some degree throughout its colonies and Hong Kong remains a successful model of his economic vision as a result.

George is buried in Brooklyn’s bucolic Green-Wood Cemetery. His memorial consists of a bust backed by a granite dado which once held bronze wreaths, plaques, and moldings. Many of the bronze elements had been lost or stolen since it was erected. The cemetery engaged us to research the lost elements, provide new bronze replicas, and preserve the monument.

Our conservators identified all missing elements and prepared new bronze cast replacements. These were mounted on the cleaned granite dado. All bronzes were patinated to match the originals and were then protected with a hot wax coating. 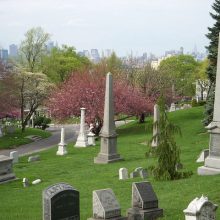 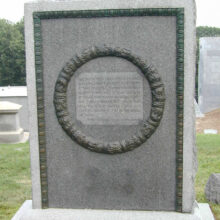 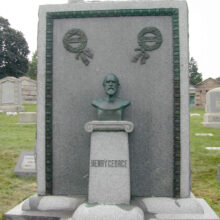