The Hotel Monaco in downtown Washington, D. C. Was originally designed by Robert Mills, architect of the Washington Monument, in 1839, with the first significant extension built in 1866 by Thomas Walter. The building housed various government agencies, including serving as the location of America’s first public telegraph, opened and operated there by Samuel Morse. It was converted into the Hotel Monaco in 2002, and is now a National Historic Landmark.

In the recent past, a section of the marble cornice fell from the building, leaving portions of several dentils remaining. The client was interested in replacing the stone in kind to maintain the building’s aesthetic compatibility and structural integrity.

We were contracted to provide conservation testing on the stone. Through an examination of the compressive strength, density, and absorption of the stone, as well as its current condition, we were able to compare it to potential replacement stones and provide recommendations for sourcing. The composition of the mortar was also analyzed, including the binder type, aggregate type, mix ratio, and condition in order to recommend an appropriate mortar mix. 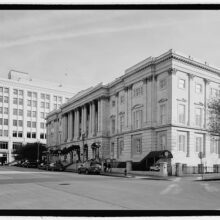 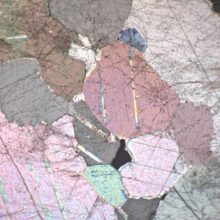 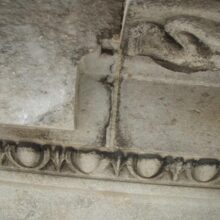 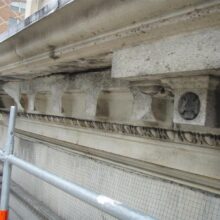