The Jacob Wrey Mould Fountain was originally installed in City Hall Park in lower Manhattan in 1871. The fountain was designed by Jacob Mould, who served as Assistant Architect, Associate Architect, and eventually Chief Architect of the New York City Parks Department. The fountain features a broad, multi-colored granite basin with semi-circular pools on both sides, and a central cascade. In 1920, the fountain was disassembled and shipped to Crotona Park in the Bronx, where it remained in obscurity until 1998. At that time, plans were approved to move the fountain to its original downtown site, a relocation that would coincide with the grand re-opening of the renovated park.

The fountain had suffered an unfortunate period of mistreatment and neglect while in the Bronx. All bronze elements and the central fountain stonework were missing. Shapeless gray blocks had been used to replace detailed granite capstones and several coping-stones from the lower basins were missing. In addition, all granite surfaces were covered with numerous coats of white over-painting in an attempt to mask graffiti.

A condition assessment was performed on the remaining granite perimeter walls of the fountain and plans were developed for the relocation and restoration of the basin, so that the finished fountain could serve as the centerpiece of the 2000 rededication of City Hall Park. The existing stonework was cleaned of over-paint and the corner capstones were replaced with reproductions of the originals. Other lost features of bronze and granite were replicated using the original drawings and early photographs. 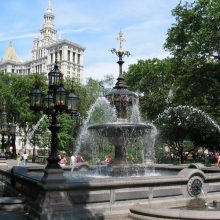 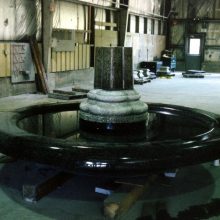 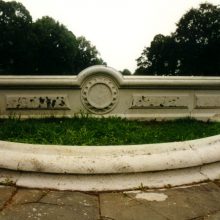 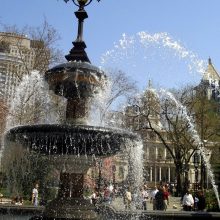 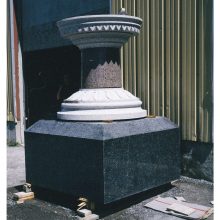 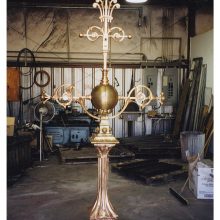