The Thomas Jefferson Monument is located in  a plaza below the northern steps of the Rotunda, Thomas Jefferson’s central structure for his World Heritage Site campus. The monument features a bronze statue of a standing Jefferson posed atop an inscribed bell with allegorical angels at the four main faces. The angels represent Liberty, Justice, Freedom of Religion, and an un-credited figure which are in recognition of Jefferson’s achievement in composing the Declaration of Independence. The sculpure is the work of Moses Ezekiel, a Virgina native who also designed the statue of Homer on the Lawn. The bronze construction is mounted on a Rosso Antico Marble base. During the assessment phase of the project, our conservators found that some elements were missing from the bronze statue. The missing elements included a sword, crown, and scales missing from the figure Justice; and the sword from the figure Liberty. The Rosso Antico Marble base had numerous spalls and losses over the majority of its faces, as well as copper staining and exposed joints.

We were contracted to clean and repair the monument as part of a larger restoration project of UVA’s outdoor sculpture. The entire statue was washed to remove soiling and accretions and then hot waxed to help protect the bronze surface. Missing bronze elements were replicated based on historic photos and archival research and attached in their original locations. The base was repaired using a combination of stone dutchman from some of the last remaining stock of available matching stone and colored cementitious scagliolo patches, and failed lead caulking was reinstalled to seal the base joints. Copper staining was also removed using chelating poulitces. 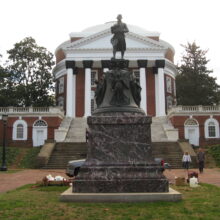 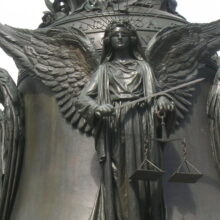 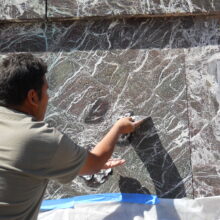 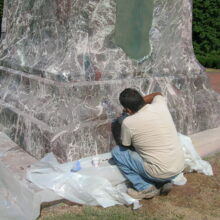