The Jefferson Hotel, opened in 1895 by wealthy Richmond citizen Lewis Ginter, quickly became a prestigious landmark and host to a distinguished list of guests and staff. Ginter commissioned the architectural firm of Carrere and Hastings to execute his plan. Recovering from a decline brought about by WWII, it was once again considered one of the finest examples of Beaux Arts architecture in 1969 when the hotel was listed on the National Register of Historic Places.

The Carrara marble statue took the sculptor Edward Valentine two years to complete and was done to such exacting standards that the artist actually borrowed clothing worn by Jefferson to use as a model. When a fire broke out in the hotel in 1901, a rescue team carried the statue out on mattresses. Unfortunately, the head was damaged in the process, but the sculptor was able to reattach it.

We were contracted to clean and restore the statue to mitigate problems associated with the public, maintenance and previous repairs. Cleaning consisted of dry cleaning with a HEPA vacuum and brush to remove the dust, cleaning with a mild detergent solution, and localized cleaning, removing heavy soiling, soiling entrapped in wax, and staining associated with previous repairs. On the base, a heavy build-up of wax floor coatings was removed using solvents gels. In-painting of existing repairs and minor chips and spalls along the base edges made the statue more visually cohesive. 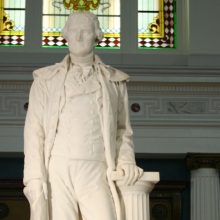 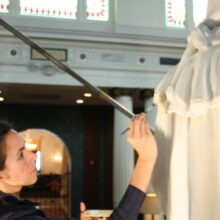 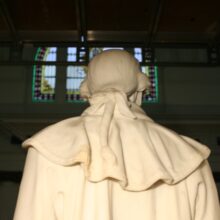 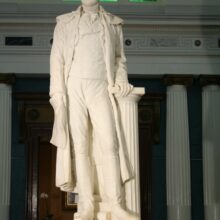 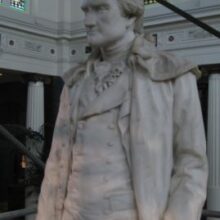