The Joyce Motors building located in North Arlington, Virginia was built between 1949 and 1950. The original construction of the building was a Texaco gas station, designed in the “Streamline Moderne” architectural style. The building has many character defining architectural elements including: the porcelain enamel metal panels, decorative band, garage doors, corner bumper guards, and aluminum windows. The building is a historic enamel paneled garage that sits in the middle of a lot slated for development. There is an 185,000-square-foot building set to replace Joyce Motors, which will include 3,200 square feet of ground-floor retail and roughly 200 spaces in an underground parking garage.

EverGreene performed a conditions assessment for the construction developer’s team. The long-term project goal is to disassemble from the building in its historic location and move it to the corner of the lot, where it will be incorporated into the new building’s design. A historic report was performed by Traceries to determine what elements are contributing. Our team was brought in by EHT Traceries to assess the feasibility of the developer’s plan to move the building.

Our findings were coalesced into a report that will serve as guidance for the disassembly of the building and its reconstruction. 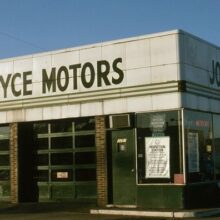 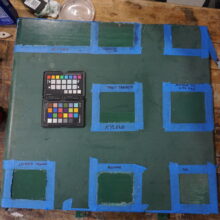 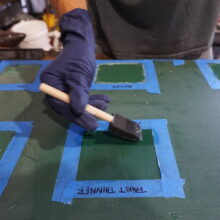