Kathrineberg was built in 1830 on the island of St. Thomas, U.S. Virgin Islands, for a wealthy Danish plantation owner who later became governor of the Danish Virgin Islands. During the half century that followed, the house lodged a number of affluent Danish families.

In 1918, following an extended period of neglect, the house underwent its first major restoration. Kathrineberg suffered extensive damage during the hurricanes which raged through the islands in 1979 and 1981, and again with the advent of Hugo in 1989 and Marilyn in 1995. By the mid-1990s the house was suffering from severe water damage, evidenced by an overpowering smell of mold and numerous wallpaper and paint failures.

We were hired by the West Indian Company, Limited, to act as project manager and quality control consultant for the restoration of Kathrineberg. To help facilitate matters and allow several tasks to be performed simultaneously, the project was broken down into three major phases: 1) the fungicidal treatment and clean-up of contaminated materials; 2) the removal and disposal of the deteriorated roof and the installation of a new roofing system; 3a) the restoration of the governor’s bedroom and bathroom, kitchen, recreation room, and the replacement/ repair of all deteriorated structural timbers; and 3b) the restoration of the remaining portions of the house, electrical work, and plumbing. 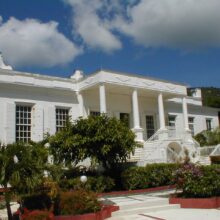 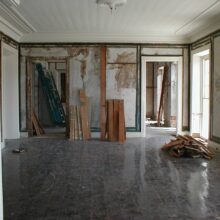 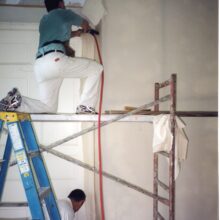 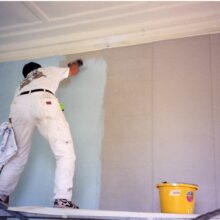 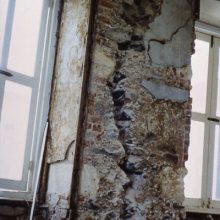