“Lady Justice” is an iconic image of fairness and equality under law, one that was promulgated widely in the late 19th century through the installation of over life sized sculptures at civic centers across the country. This and other figures were available in a variety of pressed sheet metals from catalog companies such as WH Mullins.

This copper repoussé figure was fabricated in a manner similar to that of the Statue of Liberty. The strength of the copper sheets had been severely compromised through later modifications to its internal armature. Solder joints had opened, breaking off the left arm and a copper sheet from the shoulder. Some elements (such as the scale) had become displaced or been inexpertly repaired. Additionally, a dark surface coloration had developed that made the solder joints stand out as visually inharmonious.

We were contracted to restore and relocate the statue to the new Judicial Center. The deteriorated armature was removed with minimal disassembly, and the interior and exterior of the statue thoroughly cleaned. A replacement support system specifically designed for the statue was fabricated and installed. The copper sheets were brought back to their original, intended appearance through soldering, as well as careful hammering and planishing. As part of this restoration of the form, the beam on the scale was recreated and the element reattached. Finally, a patina was applied, in keeping with the historic coloration while reducing the appearance of streaking, discoloration, and new conservation work. 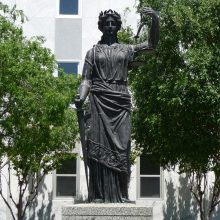 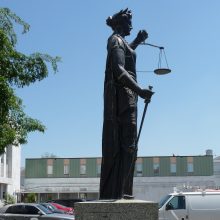 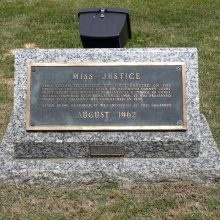 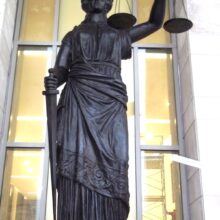 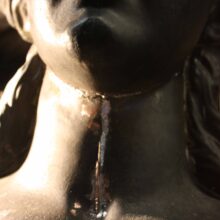 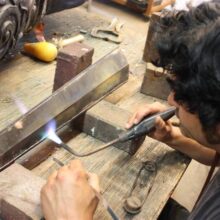 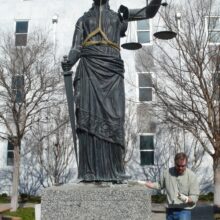 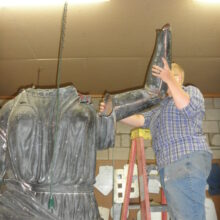 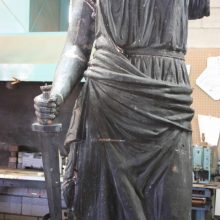