We performed conservation treatment on the Venus stature, a cast lead figure upon a cast stone base. The figure, cast in Italy, is located in the landscaped estate of a private residence in Washington, DC.

The lead statue had experienced weathering resulting in protective wax failure and lead oxide. The figure exhibited dents, stress fractures and areas of material loss, problems characteristic of the relatively soft metal. Dents and areas of loss had been filled with an inappropriate material and required removal. Corrosion was removed using a low-pressure micro-abrasion system. Given lead’s toxicity extensive site-protection was erected to contain contaminated blasting media.

Once the corrosion was removed, the inappropriate fills were removed with dental picks. Fractures, voids, and dents were filled with a titanium metal-bulked epoxy. These fills were tooled and textured to mimic the surrounding original material. The figure was then patinated with several applications of an oxalic acid solution and coated with a paste wax. 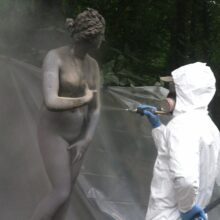 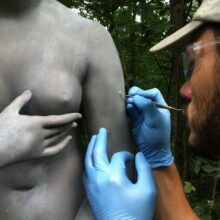 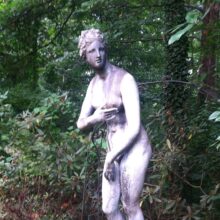 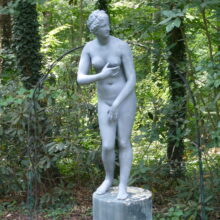