Outside the Brooklyn Museum in New York stands a thirty-four foot replica of America’s most powerful symbol of freedom, Liberty Enlightening the World, also known as the Statue of Liberty. Commissioned around 1900, this smaller version stood atop the eight-story Liberty Warehouse on West 65th Street, one of the highest points in Manhattan’s Upper West Side at the time. Though less elegantly crafted than the one-hundred-fifty foot original, she still maintains the striking expression of America’s purpose.

In 2003, after more than a century of exposure, the sculpture was removed from the building and donated to the Brooklyn Museum of Art. The formed galvanized steel and zinc skinned construction was likely created by the W. H. Mullins firm of Salem, Ohio. Over the years, the surfaces and armature had suffered losses and deterioration, in addition to the accumulation of numerous thick layers of roofing tar and paint.

After overseeing the removal to the museum, we began conservation of the statue in 2005. A new pedestal was engineered and installed behind the museum and Liberty was erected on it. All paint was removed and contained from the statue exterior and interior using Ultra-High Pressure (UHP) waterjetting technology. Heavily deteriorated areas were cut out and replaced with new galvanized sheet that was formed and MIG welded to the original substrate. Deformations in the skin were re-shaped by heating and hammering and small areas of loss were filled with epoxy body filler and fiberglass mats. After completion of all repairs, the sculpture was coated inside and out with a high performance paint system based on the museum’s selected color. 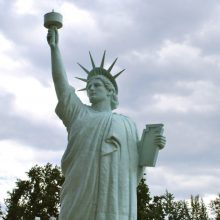 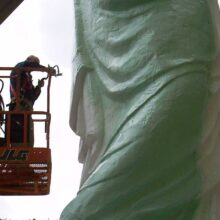 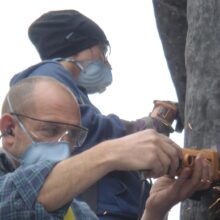 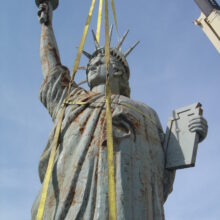 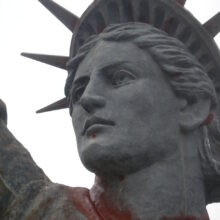 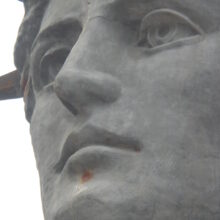