Designed by R. Thomas, then one of the most sought-after architects of public spaces, and completed in 1907, the seven-story Beaux-Arts structure encompasses an entire block in downtown Manhattan, bounded by Chambers, Centre, Reade and Elk Streets. The building at 31 Chambers Street holds the city’s municipal archives and features ornate courtrooms for New York County’s Surrogate’s Court on the fifth floor. The interior and exterior are both New York City Landmarks. The building was also placed on the National Register of Historic Places in 1972 and designated a National Historic Landmark in 1977.

EverGreene was hired to recreate the lunettes and replicate a historic metallic finish on the ornamental bronze cladding, which encases the steel structure of the skylight. The historic bronze ceiling was dramatically oxidized due to age and water infiltration. The metal finish was to be restored by cleaning and applying a chemical patina finish. To our team’s surprise, after a finish analysis, we discovered something hidden that no one was expecting — a highly unusual chemically-applied gilded finish underneath post-historic overpaint.

Our Founder Jeff Greene was thrilled about the finding, noting that this was the only instance in his 40+ year career where he had encountered this rare type of metallic architectural finish! The scope of the restoration project completely changed to stripping overpaint in the occupied building, revealing the original finish, touching up and lacquering. These processes returned the atrium ceiling to its original intended appearance. 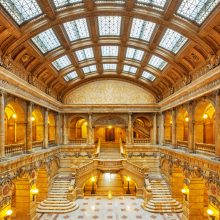 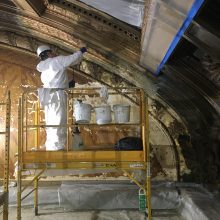 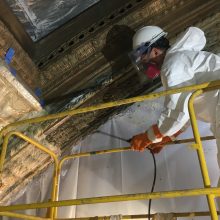 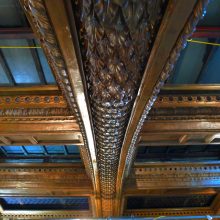 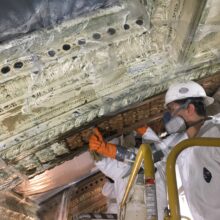 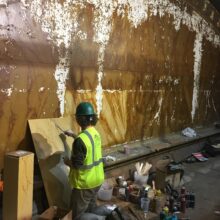 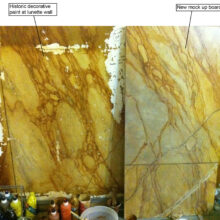