Fragments of two marble Corinthian column capitals and bases from the original Rotunda were preserved and are now displayed outdoors at the University of Virginia’s Art Museum. One of the two capitals was set upon a column base, which contained several iron cramps. The iron cramps had rusted and expanded, causing iron staining and threatened to displace the capital. Due to the outdoor environment, the column portions had become heavily soiled with biological growth. Multiple networks of cracks had formed throughout both capitals.

We were contracted to restore the column capitals.  Both capitals were cleaned to remove biological growth and general soiling. Cracks were injected with color-matched grout. The capital set atop the base was rigged and lifted in order to access the top of the base.  Corroded iron cramps were removed from the base and replaced with stainless steel. The capital and fragments were replaced in the exact same orientation, and the joint between the base and capital was repointed. 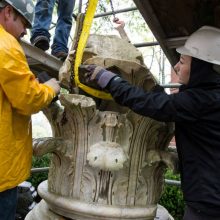 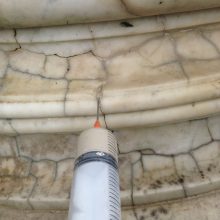 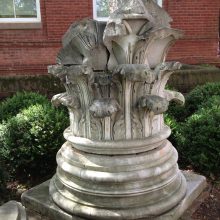 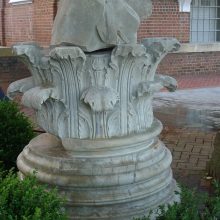 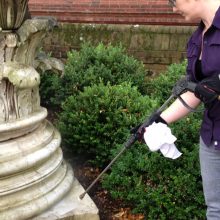