During excavations in Quantico, Virginia, a cast iron cannon from 1823 was unearthed. It had been cast in a Georgetown foundry and used in the defense of Washington, DC, before being turned northward by the Confederates during the Civil War. When they abandoned the site the trunnion and barrel were intentionally damaged to render it useless.

The cannon was transported to our studio in Maryland where it was assessed and a treatment plan developed. It was first water jetted to remove loose corrosion, and the barrel was cleaned using specialized water-jetting nozzles. All inscriptions were transcribed and research confirmed that the cannon was cast at the J. Mason foundry. This foundry was owned by the son of George Mason, the Founding Father, who once owned land near Quantico. It was then painted with a high performance direct-to-metal paint in an historically appropriate shade of black. A tampion was installed at the conclusion of treatment. The cannon was crated and returned to the Marine Corps Museum for exhibition. 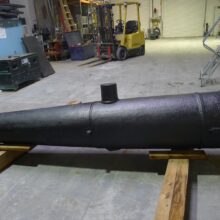 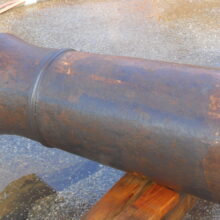 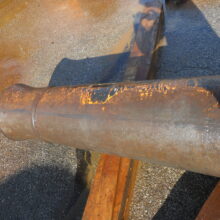