Vizcaya, the National Registry Listed historic house in Miami, Florida, integrates extensive decorative architectural sculpture made especially for the site amongst its collection of antiquities. Carved of the local coral stone, a highly figured fossiliferous limestone, the sculptures enliven the buildings and gardens with a wonderful array of classically influenced figures, urns, and grotesques. One of the most unique elements of the layout is the Marine Garden, a space composed of two identical pools, one on each side of the canal, flanked on either side by walking paths, raised walls and plantings. Nestled among the many sculptures and antiquities in the Marine Garden is a coral stone urn, one of several on the property.

The urn, located on the north side of the Marine Garden, had been knocked over and damaged. We were contracted in 2007 to repair and reset the urn. Structural scaffolding was erected at the outset to hoist and manipulate the urn. A large, dislocated fragment of the bowl was pinned in place with stainless steel threaded rod. The bowl was then reset on its base using a new mounting pin. Following cleaning, losses around the stem were rebuilt using custom mixed mortar and tooled to match the surrounding coral stone. 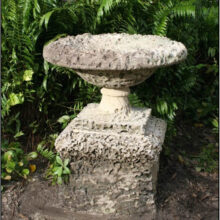 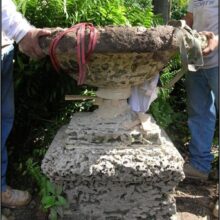 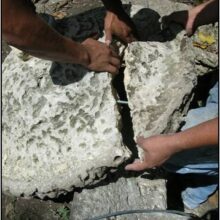