The US Marine Guard Monument was erected at Barrancas National Cemetery in 1884 to honor eight Marines who had died during an 1883 outbreak of yellow fever at their post. The monument consists of a highly-ornamented zinc obelisk casting set on a sandstone base. During the late nineteenth century, zinc became popular as a less expensive alternative to bronze in monument and memorial construction, and it was often referred to as “white bronze. ” Zinc monuments are hollow castings that typically have no interior support structure.

The Marine Guard Monument, due to its lack of a proper framework, had begun to sag under its own unsupported weight. Due to unsightly deterioration, the bottom tier of the monument had been hidden with a faux-base of marble blocks that hid the full extent of the damage, however, deterioration continued until the zinc was no longer stable. Salt concentrations from the marine environment had also caused surface damages to the zinc, resulting in numerous, white salt “blisters. ”

We treated the Marine Guard Monument as part of a large, multi-monument contract with the National Cemetery Administration. Treatment included removal of the marble blocks covering the original base of the zinc monument, removal of the monument to a workshop for repair, fabrication and installation of an interior support armature, and replication of the original zinc monument base. Surface treatments included removal of corrosion, filling of losses in the zinc, and patination to visually integrate the new repairs. The restored monument was reinstalled on its sandstone base in June of 2013. 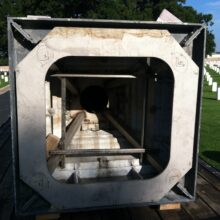 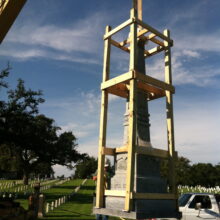 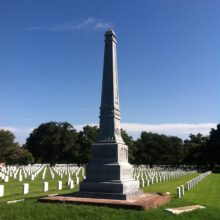