In 2012 we restored “Mars”, an over life-sized sculpture of the mythological god of war. The sculpture likely dates to the late Rennaissance period and was crafted of Vicenza stone, an Italian limestone. The figure is located on the East Terrace, a particularly prominent but also vulnerable location at Vizcaya, which looks out over Biscayne Bay. The figure sustained significant damage due to hurricanes in both 1993 (Andrew) and 2005 (Katrina and Wilma). In response to these events, the sculpture underwent stabilization efforts, but never a comprehensive repair treatment.

By 2012, although Mars had undergone numerous pinning repairs, it became apparent that the fragmented figure was exhibiting continued movement. Cracking continued to develop along existing repair and break lines. It was generally determined that the figure’s slender legs could no longer adequately support the weight above. In addition, it was observed that the plinth was no longer level and had become partially buried by the terrace pavers.

Substantial intervention was necessary to fully stabilize the huge sculpture in a comprehensive, long-lasting way. The intent was to provide nearly continuous pinning through the sculpture and its plinth. This would effect a level of overall stabilization superior to the use of multiple, individual pins. To that end, we disassembled the statue from its base, removed previous repairs and laid the large figure on his back. A stainless steel Cintec anchor was inserted from the self-base up to the chest area, a delicate effort that required threading a 6-foot long core drill bit through narrow ankle, leg and chest areas. The anchor was grouted in place. The plinth was found to have settled almost 1 foot below its original elevation. It was raised on a new concrete pad, leveled and cored as well. The anchor in the figure was extended through to the concrete base and also grouted during setting of the sculpture to provide uninterrupted stabilization. Work was completed on time and in budget. 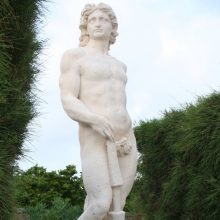 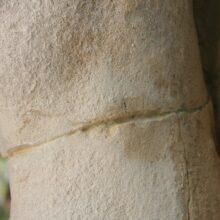 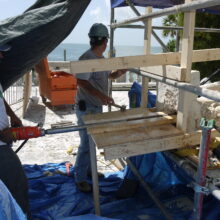 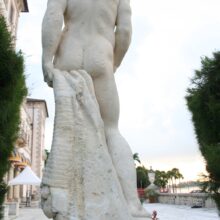 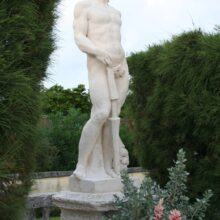