Brackenridge Park in San Antonio, Texas, encompasses acres of parkland, streams, bridges, and the remnants of a former estate known as “Miraflores.” Miraflores was built in the 1920s for Dr. Aureliano Urrutia, a well-known doctor, and refugee from Mexico. It contains faux bois by local folk artist Dionicio Rodriguez as well as decorative tiled entrance gates, fountains, stone walls, and decorative iron fences  Although many of the original features have been lost, the park recently became the property of the City of San Antonio and was placed on the National Register of Historic Places.

We were contracted in 2012 to plan and perform a variety of conservation treatments at Miraflores Park as a remediation project associated with a major roadway project on nearby Broadway Avenue. Work began with the disassembly of the historic stone wall to enable other heavy roadway construction to occur. Stone location and orientation were documented and both the wall and associated fence were painstakingly rebuilt and reinstalled to match the existing. Conservation of the historic towers included stucco cleaning, crack injection, patching repairs, fabrication and installation of new cast stone, and the application of a water repellent to deter future weathering. Interior stucco was re-alkalized to restore a more appropriate pH to protect embedded metal lath and rebar. Roofs were redesigned and rebuilt to promote better drainage away from these historic structures. The south elevation tiles were gently cleaned, losses rebuilt, and carefully painted to match the existing. Iron fences and lanterns were cleaned and painted a historically appropriate shade of black. The west tower, which had sunk considerably out of alignment, was underpinned in place and leveled to a stable orientation. 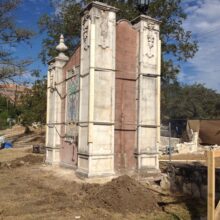 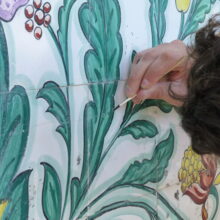 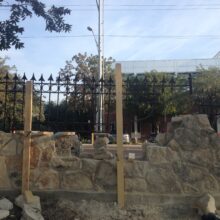 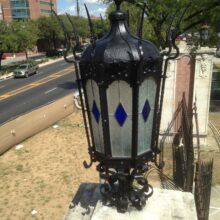