The National Park Seminary began in 1887 as “Ye Forest Inn,” a summer vacation retreat for wealthy Washington, DC. residents. In 1894, the Seminary became a private, prestigious girls’ school, operating until 1942. The property was then acquired by Walter Reed Army Hospital and served as a facility for disabled Soldiers through numerous military conflicts. After a period of disintegration, the Seminary was reclaimed and today serves as a community living space and historic site.

We were hired in 2015 to treat ten cast stone Art Nouveau-style caryatids that flank the loggia arcade of the Aloha house, one of many unique structures on the property. The figures had been coated several times with assorted paints, which were failing to varying degrees. To begin the restoration process, we tested chemical paint removal procedures to determine which removal means and methods would be most effective, yet least aggressive. We also conducted a paint color analysis to match the original color—believed to mirror the color of white marble—to new paint coating.

Through testing, it was determined a multi-strip paint removal chemical was most effective. Adjacent areas were protected and paint was thoroughly removed. The loggia, walkway, and handrails were protected while the maidens were treated. Exposed rebar was cleaned and patched with a corrosion-inhibiting epoxy and cracks were filled with grout. Each maiden was coated twice with a specially formulated mineral coating paint for masonry surfaces using natural fiber brushes. We provided a detailed treatment report including research, testing analysis, photographs, and future recommendations. 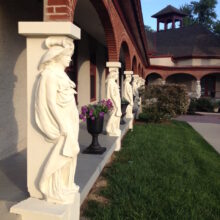 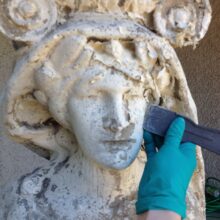 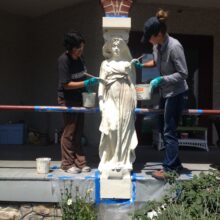 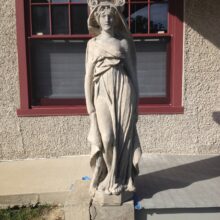