To remember the men and women who died in World War I, a large monument known as the Liberty Memorial was constructed in Kansas City, Missouri in the early 1920s. After its completion in 1926, 150,000 people gathered for the dedication by President Coolidge. Decades later, the monument fell into disrepair and closed in 1994. Plans for restoration of the monument and the expansion of the site were set into motion only a few year later.

As part of the museum’s rehabilitation, EverGreene conserved the monumental historic mural Pantheon de la Guerre, painted on canvas by Pierre Carrier-Belleuse and August-Francois Gorguet from 1914 to 1918. This impressive mural is over 400 feet long and 45 feet high. We also conserved In Memoriam… by Jules Guerin, three paintings by MacMorris in the Hall of Memory, 24 painted maps, and Dedication of Memorial Site by MacMorris and Gillespie. Conservation work began with historic research and written and photographic documentation. After this preliminary stage, our conservators executed stabilization of flaking paint, conservation cleaning, reattachment of delaminated fabric to support, and minimal inpainting.

In addition to conserving murals, we also restored the Caen stone plaster veneer wall, which included application of two-coat integral color plaster system. Restoring the ornamental plaster required installation of molded and recasted elements, consolidation, and skim coating. According to the results of our paint analysis, we also restored the decorative painting throughout, including the Dutch metal leafing, glazing, and base painting. Finally, EverGreene conserved the linoleum mosaic floor.

The site, which still includes the original Liberty Memorial, is now known as the National World War I Museum and Memorial. Declared by Congress as America’s official WWI museum, the museum is a National Historic Landmark and UNESCO World Heritage Site. 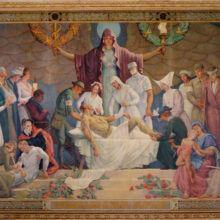 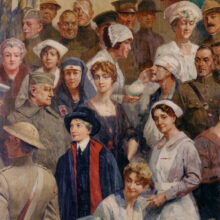 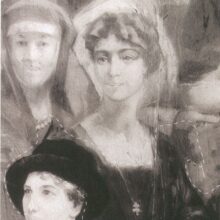