Located at the northeast corner of Flushing Avenue and Navy Street in Brooklyn, New York, Admiral’s Row was the residential section of the Brooklyn Navy Yards. In particular Building B was built along the southern edge of the Yards in 1872 as the living quarters for the captain of the yard. It is the largest single residence of the Row, featuring Greek Revival- and Italianate-style elements, typical of the mid-nineteenth century. Building B consisted of three stories with a basement, containing ten bedrooms and six bathrooms. A kitchen extension had been added to the rear of the building in 1931.

Admiral’s Row sat unoccupied for over 40 years and had severely deteriorated over this period—Building B was the last of the Row still standing. In order to allow access, the entire building had to be extensively reinforced, including the walls and ceilings of the structure.

We were contacted by Steiner NYC to conduct a survey and condition assessment of all plaster elements still in existence in the building. Our architectural conservators took detailed measurements of all rooms, documenting the condition of plaster walls, ceilings, and decorative plaster elements, and identifying which would be able to be salvaged and which needed replication. Based on the findings of the assessment, essential ornamental plaster pieces were reclaimed, photographed in detail, and transported to the EverGreene studio in Brooklyn, NY, for preparation for the upcoming re-creation and ultimate re-implementation at their original location. 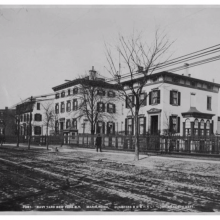 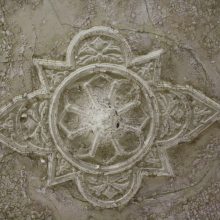 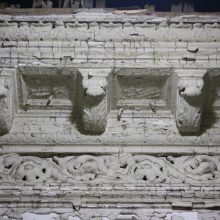 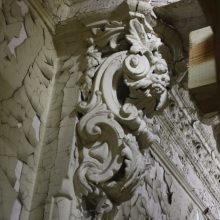