The sculpture Night, of Tennessee Marble by the sculptor Adolph A. Weinmann, made up one-half of a pair of female statues that flanked the large clock at the 7th Avenue entrance of the original Pennsylvania Station from 1910 to 1964. The Brooklyn Museum acquired Night soon after the station was demolished. All surfaces were soiled with atmospheric deposits, plant material remnants, and biological growth. Climbing vine suckers that had enshrouded the statue remained adhered to the stone even after vines were killed and removed. Carbon and gypsum crusts existed in protected hollows of the statue and several cracks penetrated the statue’s surface.

Treatment of the sculpture began with a general cleaning with an anionic detergent to remove atmospheric soiling and biological growths followed by low-pressure water rinses and hand scrubbing with natural bristle brushes. Plant suckers that remained after the vines were removed were detached by carefully scraping with bamboo skewers and hog hair bristle brushes. Nebulizer sprays were used to dissolve gypsum crusts, which eliminated about 80% of the unsightly black crusts. The remaining 20% was removed by scrubbing with natural bristle brushes, scraping with stainless steel scalpels, and with the use of controlled micro-abrasion techniques. All cracks were filled with dispersed Hydrated Lime (DHL) injections. 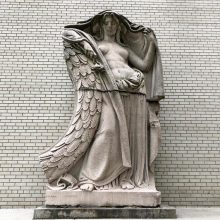 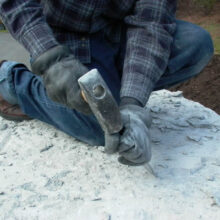 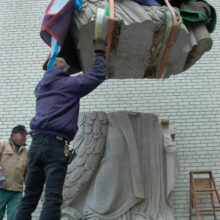