We were contracted in 2013 to treat two zinc lion sculptures at the National Park Seminary at Forest Glen. The pair was cast at the J. L Mott Iron Works, one of the major 19th century zinc statue suppliers.

Prior to conservation, the lions had severe failure of their paint coatings and several sections of the self-base, including parts of the edge molding, had been lost. The lions originally had no interior support system, so the weight of the zinc had caused deformation of the sculptures and their self-bases. We had the missing parts of the self-bases recast in zinc and soldered them in place. Cracks and broken joints were also soldered. Conservators designed and fitted stainless steel armatures to support the weight of the sculptures, relieving the self-bases from carrying the load.

To replicate the original statuary bronze finish, conservators devised a coating system that consisted of an acrylic primer followed by two shades of acrylic brown paint mixed with iridescent bronze paint. A lighter shade was applied first and allowed to dry, after which a darker coat was applied. While still wet, the darker color was wiped off on the higher areas of the sculptures to reveal the lighter color beneath. This emphasized the sculptures’ shadows and contours to imitate the multitone shades and hues of a bronze patina. Following this, a urethane clearcoat was applied. 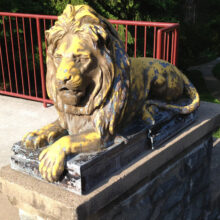 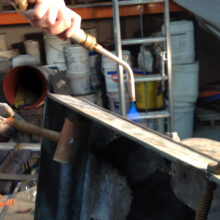 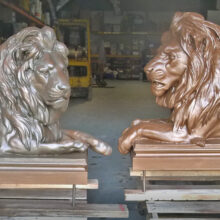 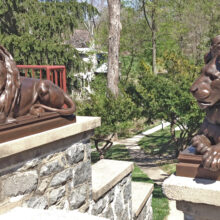 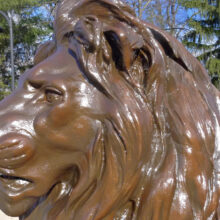