The Onondaga County War Memorial Arena, located at 515 Montgomery Street in Syracuse, New York, was originally constructed between 1948 and 1951 to serve two main functions: act as a memorial for US soldiers from Onondaga County and as a multi-purpose auditorium space.

The building was designed by Edgarton and Edgarton, Architects and Engineers Associates. They designed the structure in the modern style using mainly concrete due to the longstanding history of concrete production in Central New York. Memorial Hall, at the north end of the building, was designed as a living memorial dedicated to the men and women who lost their lives in World Wars I and II. The long, rectangular room is adorned with two, 16 foot by 24 foot murals painted by prominent local Syracuse artist G. Lee Trimm and depicting the two World Wars. The murals were painted using oil on canvas and were applied directly to the plaster walls with an unknown adhesive.

After the original construction, other dedications have continued to be made throughout the building to include and honor those who fought throughout the history of the United States. The building was listed on the National Register of Historic Places in 1988.

EverGreene was retained by Onondaga County to treat the two G. Lee Trimm murals. The purpose of the project was to carry out stabilization, cleaning, and restoration of the canvas and painted surfaces of the murals. The surface was gently cleaned, flaking paint was re-adhered to as necessary, delaminated canvas was re-attached, a protective consolidant was applied over the whole surface, areas of loss were infilled and in-painted, and the entire surface was coated with a final protective varnish. 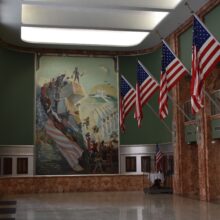 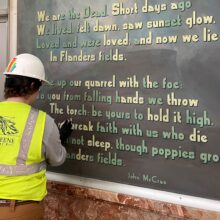 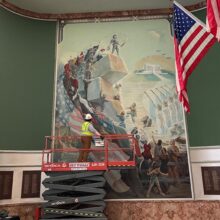 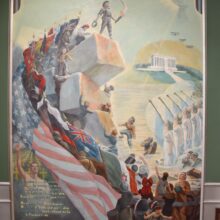 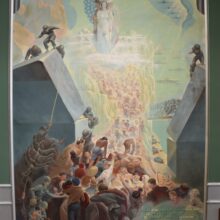 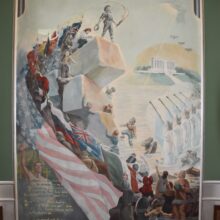 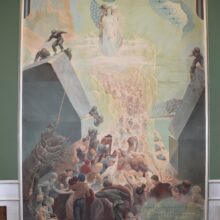