The Armory was built by New York State’s Seventh Regiment of the National Guard in 1861. The Armory’s 55,000 square foot drill hall remains one of the largest unobstructed spaces of its kind in New York. EverGreene performed pilot projects at two historic company rooms to carry out the design intent  of the Armory and Herzog de Meuron Architects.  The work performed was a combination of conservation and stabilization with restoration.

In Company Room D, EverGreene carefully removed the post-historic bas-relief plaster panels, composition ornament, and non-original overpaint from the ceiling and walls.  This “delayering” process was  sensitive and time intensive.  Conservators then provided a minimum of aesthetic loss compensation to unify the historic 1880s design.  A metallic stencil overlay pattern designed by HdM was applied over the the remnants of the historic presenting layer.  Isolating varnish preserves the original paint. Conservators also cleaned and preserved the 1880s Cuban mahogany strap-work on the ceiling.

In Company Room E, EverGreene methodically removed post-historic plaster strap-work and bosses from the ceiling, followed by an intensive paint stabilization campaign, and then “delayering”  of non-original coatings (both chemically and mechanically), down to the 1880’s presenting layers.  Very minimal aesthetic loss compensation was provided to fill nail holes and other small losses, to unify the design.  The walls were also delayered to remove non-original wallpapers.  The underlying historic decorative painting was in remarkably good condition, with metallic paint still lustrous. The plaster stabilization scope at damaged walls and ceilings was extensive, with re-keying of plaster to lath, addressing inter-layer cleavage between the scratch, brown, and finish coats, as well as the filling of voids and macro and micro-scale reattachment. In both rooms, the walls and ceiling were varnished with a conservation-grade non-yellowing coating of appropriate sheen to protect the patina of the decorative painted surfaces. 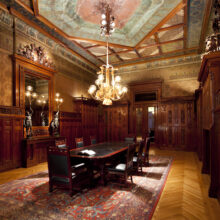 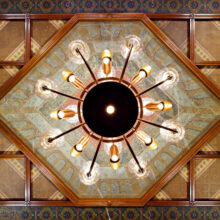 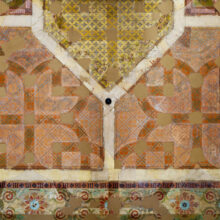