In addition to battlefield casualties, many Civil War soldiers died in prisons of starvation or disease. The National Cemetery in Salisbury, North Carolina, holds Union soldiers who died at the prison there. The Pennsylvania Monument, dedicated in 1910, was designed by Carroll J. Clark to commemorate the 736 Pennsylvanian officers and soldiers who died as POWs.

The monument required general rehabilitation. Conditions needing treatment included complete failure of the mortar joints in the pavilion roof, the stepped base, sidewalk, and approach steps, and general soiling. The statue showed conditions typical of uncoated outdoor bronzes. Its self-base had been filled with concrete, which was beginning to deform the bronze casting. Additionally, the marble wall had become stained due to corrosive run-off from three copper plaques. We were contracted to clean the monument (including removal of as much of the copper staining as possible) and to remediate moisture infiltration through selective re-pointing using a closely matched mortar. The statue was removed from its position atop the monument and carefully lowered to the ground, where the concrete fill was removed from the base.

The interior was cleaned and treated with a corrosion inhibitor. The coating was renewed, and the sculpture was reset onto the monument with new bronze mountings. A maintenance plan was developed for the entire structure for use by the Veterans Administration, responsible for funding the treatment and managing the site. 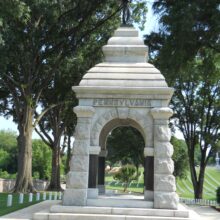 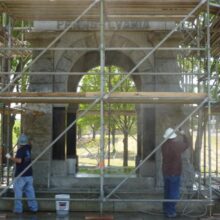 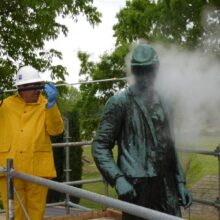 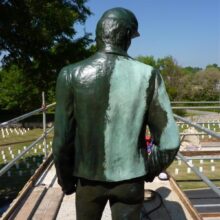 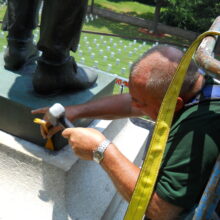