EverGreene was contracted by the National Fire Adjustment Co., Inc, to complete a condition survey of fire damaged elements at the Permanent Mission of Serbia. Onsite assessments were completed by our senior conservator to review the interior and exterior conditions of architectural and decorative features of the building.

A visual inspection was carried out along with localized cleaning tests to determine the extent of damage caused by either smoke, heat, or water as a result of the fire that occurred on the third and fifth floors of the building. The interior areas of the third and fifth floors were heavily compromised and were undergoing cleaning and stabilization during the time of inspection. All interior elements were reviewed at ground level, of the ground and second floor.

Cost estimates are provided for insurance purposes only and cover the recommended work to reinstate, repair, and restore elements to the pre-fire conditions. The fire has compromised several areas of the noted areas mainly through secondary damage with smoke and humidity. However, the fire exacerbated previous condition issues such as flaking paint, friable plaster and soiling which will now need to be addressed in full. 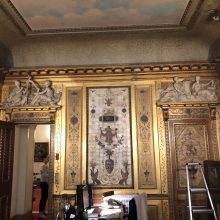 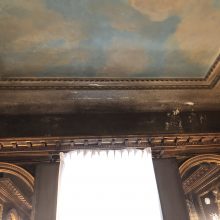 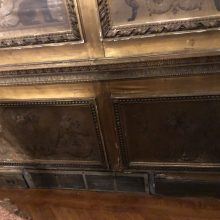