Philip Johnson’s Glass House (designed in 1945) is best understood as a pavilion for viewing the surrounding landscape. The house is invisible from the road and overlooks a pond facing the woods beyond. The house is 55 feet long and 33 feet wide, with 1,815 square feet. Each of the four exterior walls is punctuated by a centrally located glass door that opens onto the landscape. The house, which ushered the International Style into residential American architecture, is iconic because of its innovative use of materials and its seamless integration into the landscape.

EverGreene was contacted to complete emergency stabilization of the plaster ceiling of this iconic home, which has now been completely and lovingly replaced.  The system attaching the ceiling to the roof timbers was noted to be poorly constructed, almost half of the ceiling was compromised. The original 1,800 sq ft plaster ceiling was applied in a three-coat plaster system on lath with the top coat being a self-colored plaster, mixed with asbestos to resemble an exterior stucco.

The asbestos, while in very low traces, contributed to the need for complete repair and remediation. In addition, the system attaching the ceiling to the roof timbers, fastened using nails instead of screws, was inadequate for the weight of the ceiling. The damaged ceiling also prevented two of the four doors in the house from opening. EverGreene’s final challenge was matching the special visual softening effect that the asbestos gave the “presenting layer” which was finally achieved with a peculiar type of rounded ceramics. 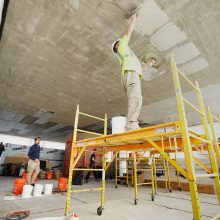 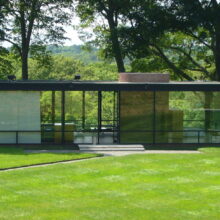 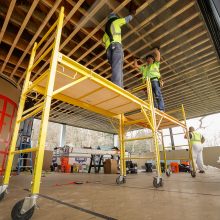 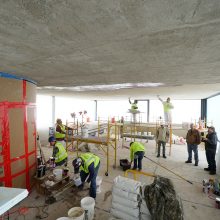 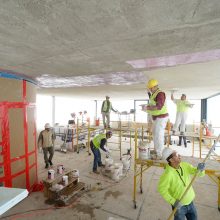 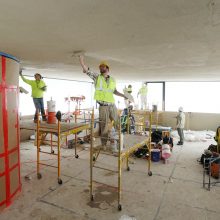 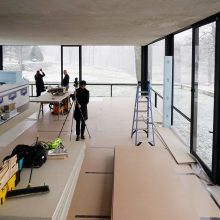 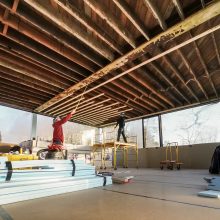