The pirate ship Whydah sank off the coast of Wellfleet, Cape Cod, during a storm in April 26, 1717, less than two years after its 1715 launch from London, England. The vessel was originally launched as an English slave ship but in February 1717, it was captured by Samuel Bellamy (better known as Black Sam Bellamy) and his crew of pirates. The ship was not only filled with sugar and indigo, but with chests of silver and gold, which Bellamy and his crew combined with their existing booty from earlier raids. In 1984, Barry Clifford discovered the “only verified pirate shipwreck” which contained significant parts of the ship in addition to a treasure trove of artifacts.

In 2006, we were contracted to perform a conditions assessment of the collection of objects. The collection includes cannons, hand grenades, padlocks, guns and gun parts, ammunition, the ship’s bell, tools, concretions, kitchen and house wares, gold and silver jewelry and currency, navigational tools and various ship parts. The artifacts are made up of one or more materials including iron, copper, bronze, silver, gold, pewter, wood, leather, bone, fibers (hemp and silk), stone, and concretions.

The artifacts were surveyed over two days by two our senior conservators. The artifacts included previously desalinated and treated artifacts on exhibit and in dry storage at the museum, and artifacts partially desalinated at the lab facility. A condition assessment report with annotated photographs was drafted for the client that included treatment recommendations and budgetary cost estimates to complete the conservation work. 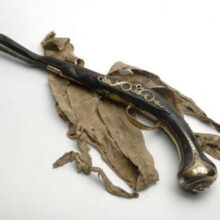 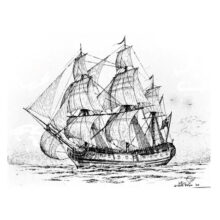 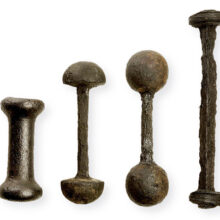 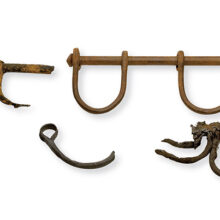