Originally designed in 1899 by architects McKim, Mead, & White, the private club has been designated as both a New York City Landmark and a National Historic Landmark. The palazzo-inspired building sits prominently on a Fifth Avenue corner, within a distinguished and historic neighborhood filled with attention-provoking monuments and landmarks.

The project began with the Club’s desire to improve the lighting conditions in the Main Dining Room in order to improve the user-experience and enhance the significant architectural features, the most prominent of which are the 38’ polychromed historic ceilings and wood paneled walls and columns. At the same time, the Club wanted to bring the ceiling to a sound condition and well-maintained appearance. Functionally, in addition to serving members three daily meals, the space is also used as an event space for programs ranging from lectures to weddings. The Club had found their existing lighting and control systems were inadequate for their purposes.

The Private Club Main Dining Room Ceiling project was a thoughtfully planned and executed process representing the collaborative efforts of the Club, Zubatkin (Owner’s Representative), EverGreene Architectural Arts (Conservation, Plaster, and Murals), Kugler Ning Lighting, Constructomics (General Contractor), and ICOR Consulting Engineers (MEP). The project goals were to restore the ceiling with great respect for the original design and materials, enhance the dining room with appropriate architectural lighting for its function and historic character, and fulfill its aesthetic potential. The cleaning and conservation of the original painted and gilded plaster finishes refresh the appearance of the ornate ceiling, while new murals depicting the evening sky provide movement and drama.

In 2015, Kugler Ning began designing lighting concepts and testing solutions with extensive mock-ups. Simultaneously, EverGreene Architectural Arts performed a preliminary conditions assessment, and the scope of work was developed to treat the obvious damage and deterioration of plaster and paint, and to correct previous repairs that were deteriorating or visually incompatible.

Zubatkin steered the team of consultants to develop a coordinated scope of work, schedule, logistics, and budgets, to accomplish the Club’s goals within a compressed 6-week construction schedule during the summer of 2017.
The implementation phase of the project involved coordination between the project team members and multiple trades, to complete the scope of work including site protection, scaffolding, electrical, lighting, plaster, finishes conservation, decorative painting, and creation of new murals. With the limited period of scaffold access, many specific decisions had to be made about technical treatments, finish colors and sheens, and electrical installations. Mockups, client reviews and decisions were timed adeptly to manage progress in the work schedule.

Ceiling treatments began with conservation testing, plaster sounding, and documentation of conditions once the scaffold was installed for access. The original polychromed decorative painting, gilding, and faux bois were cleaned and consolidated to stabilize and prevent further deterioration. Damage was infilled to level and in-painted to match adjacent surfaces.

Water damage and systemic cracking at the 26 cartouches in the cove, and isolated areas of plaster damage, were treated with plaster consolidation and selective replacement. Two missing decorative plaster grilles which had been replaced with plywood during the installation of a HVAC system were recreated by making molds, recasting, and matching decorative paint. The flat ceiling panels that had been patched and repainted in different shades over time were stabilized, color matched to the Munsell Color Chart and repainted to create a uniform appearance and sheen.

Portions of the existing murals on canvas were heavily overpainted and damaged, and as such, the team’s decision had been made in advance of construction to replace the center panel and two roundels, after stabilizing and encapsulating the existing. The theme of the evening sky contrasts with the first floor Main Reading Room morning sky mural, which was created by EverGreene in 2000. To meet the fast-track schedule, EverGreene’s Design Studio prepared a concept design rendering in May, ready to adjust to colors and finalize design when the ceiling could be reached from scaffolding. Areas of the extant mural and adjacent polychromed ornament were cleaned and color matched to Munsell Color Chart. EverGreene’s mural studio prepared a color palette and mockup for client approval. The team engaged the Club Committee for review during the studio painting of the murals July and August 2017. The sky murals were designed and painted by EverGreene artists to highlight atmospheric space, height, and movement, as well as capture a moment of dusk and sunset in colors that complement the historic ceiling. 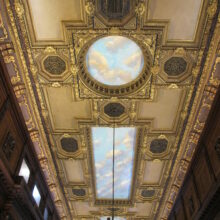 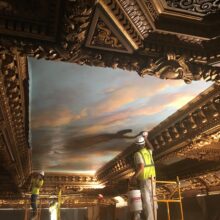 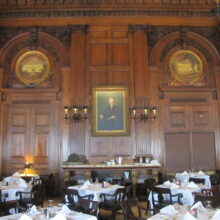 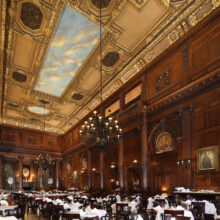 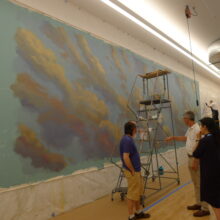 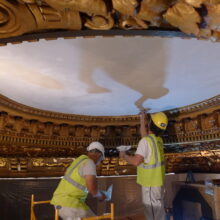 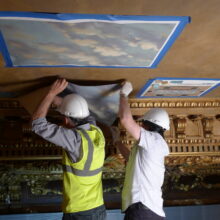 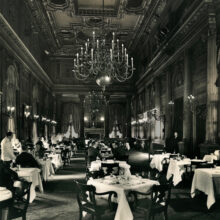 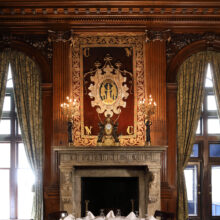 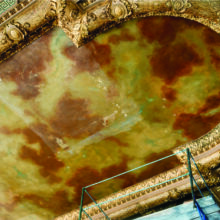 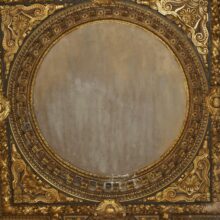 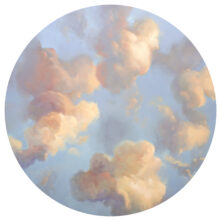 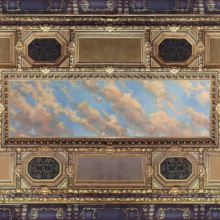 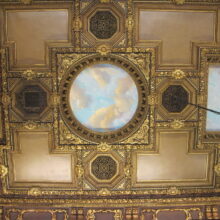