Radio City is the iconic theater, and its public areas feature unique murals that make going to Radio City unforgettable.  EverGreene performed the conservation of six murals, including Witold Gordon’s Maps of the World and Henry Billings’ Crouching Panther. We provided written and photographic documentation, removal of synthetic varnishes and non-historic overpaint, and minimal inpainting.

Ezra Winter’s 60-foot-tall mural, The Fountain of Youth, was painted in 1932 for the Grand Foyer. Polyurethane had been unfortunately slathered on the mural, requiring EverGreene conservators to diligently work with tape to remove it.

We repainted a damaged and crumbling Yasuo Kuniyoshi (1933) mural that was painted directly on plaster. Our conservators protected the remaining portions of the mural by consolidating the plaster. Once stabilized, we applied an isolating varnish and reinstated the mural with reversible conservation paint.

Additionally, we conserved History of Tobacco (Saint Nicotine), the smoking lounge wallpaper consisting of stenciled patterns on thin aluminum foil surface, designed by Donald Deskey in 1932. We removed surface dirt, discolored varnish, and stains, reattached it to the substrate, and minimally inpainted areas as well. 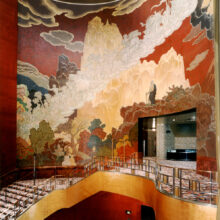 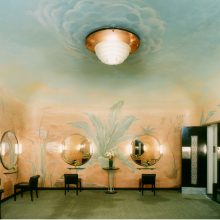 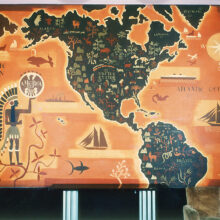 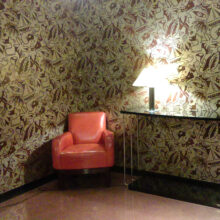 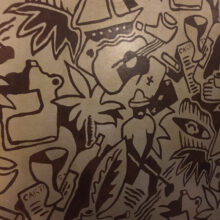 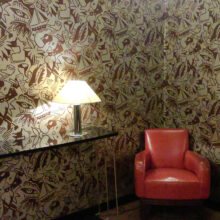