The Riverside Church at 120th St. On the west side of Manhattan was completed in 1929. Designed to recall Chartres Cathedral, the vast structure covers two city blocks and rises 28 stories. The building is constructed of Indiana limestone and ornamented overall with a bewildering array of figures and gargoyles. Carved by the Piccirilli Brothers, who created the most iconic stone works in New York, the sculptural program maintains its medieval tradition but with an Art Deco manner contemporary to its time.

Integrated Conservation Resources, Inc. (ICR) and Integrated Conservation Contracting, Inc. (ICC) studied the Indiana limestone carvings after the building was scaffolded during a recent waterproofing campaign. They were dismayed to find a unique and troubling condition had developed whereby a hard crust had formed on the exterior of many carvings, whilst the underlying stone material had decayed leaving only loose grains. Cracks had formed on the skins exposing the damaged interiors to water and causing features and whole sections to fall off.

Our conservators were hired to develop a plan to treat the damage, prevent further decay, and restore the lost elements. Molds were taken of vulnerable features for use in replication. Cracks and losses were excavated back to sound stone while preserving the original carved surfaces wherever possible. Losses were then built back with a color matched mortar to restore the lost features. After curing, the sculptures were consolidated. 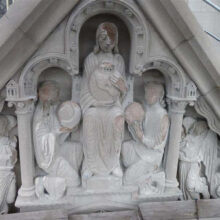 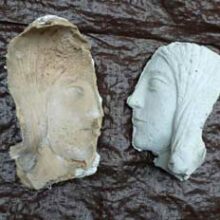 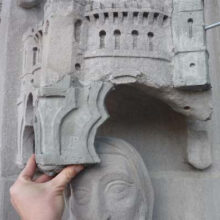 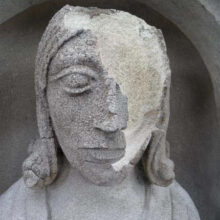 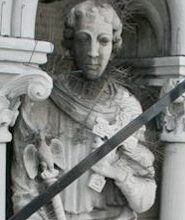 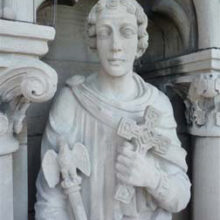