From 2003 to 2006 we stabilized and restored the Saturn V Rocket located at the Johnson Space Center (JSC), Houston, TX. This example is one of three surviving vehicles built during the late 1960s to launch Americans to the moon, and is assembled from flight-ready stages and spacecraft from the Apollo and Skylab programs. Measuring 363-feet-long and capable of generating 7. 5 million pounds of thrust, the Saturn V remains the largest, most powerful American launch vehicle ever built. The rocket had been displayed outdoors and on its side since 1977 on a series of heavy steel display frames. Like the rocket, these frames also exhibited paint failure, moisture infiltration, severe corrosion and structural failures.

The various sections of the rocket were de-mated, allowing further investigation and assessment not possible while they were coupled. At the time, conservators and structural engineers found that the existing display stands of the Service Module (SM) and Command Module (CM) were no longer structurally sufficient.

Creating a safe, visually striking way to display the conserved rocket in a newly constructed building was extremely important. We worked with structural engineers to develop a display solution that was sound but also minimized the use of highly visible, non-original external supports.

Work began by stabilizing the SM itself, which had also been weakened by decades of exposure. An aluminum box beam was installed to span the length of the interior space, fastened to the fore and aft bulkheads, also newly reinforced. The existing SM display stand was modified and reinforced to incorporate new, strengthened transitions between the SM and the CM (foreward), and SLA (aftward). An entirely new CM display ring was fabricated; this structure was attached to the existing SM display frame. The new display ring was discretely situated between the CM and SM, allowing the CM to “float” without a visually obtrusive, free-standing frame underneath. 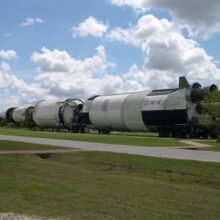 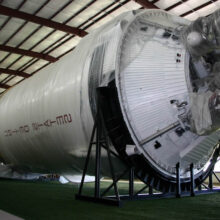 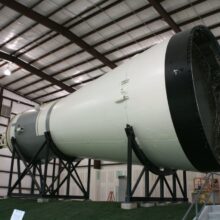 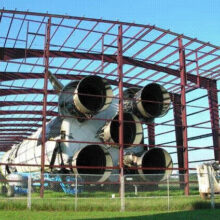 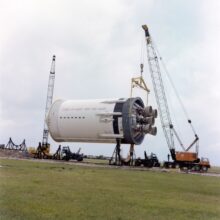 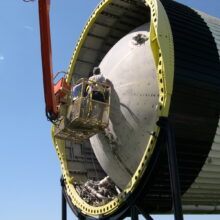 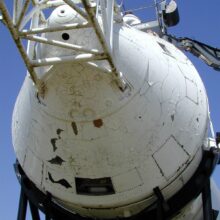