Shea’s Buffalo Theatre is the historic crown jewel of Shea’s Performing Arts Center. This 4,000 seat theatre designed by Rapp & Rapp and built by Michael Shea in 1926, it was originally a movie house called The Wonder Theatre. Preliminary restorations began in the ’70s after the theatre was saved from demolition, and eventually added to the National Register for Historic Places.

For the final phase of Shea’s Performing Arts Center’s 18-year renovation, EverGreene restored the decorative paint and plaster ornament in the dome and ceiling of the Tiffany-designed auditorium interior. Damaged sections of historic plaster were recast on-site using pre-existing ornament and reattached to the ceiling. Other sections of ornamental plaster were discovered to be missing lath. It had become detached over time, compromising the stability of the auditorium ceiling. Plasterers reattached these sections, securing them with traditional plaster and mechanical supports, as well as modern conservation methods.

Next, the decorative paint was rejuvenated; the ceiling was cleaned, painted in a historically accurate palate, glazed and gilded. Artisans worked on the ceiling for six weeks, atop a 76’ tall scaffolding. Shea’s is resplendent and continues to serve the Buffalo community as a home for theater, dance, and musical performance. 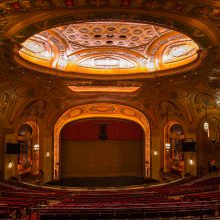 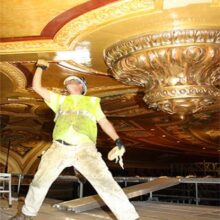 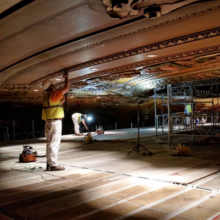 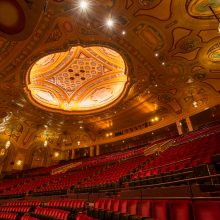 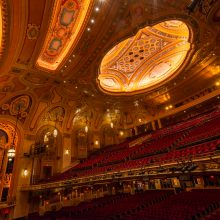 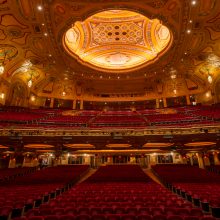