Augustus Saint-Gaudens’ last great public monument is the equestrian William Tecumseh Sherman in Grand Army Plaza, New York City. On a base designed by Stanford White, the grand scaled work is both a moving portrait of the Union general and a powerful statement of the horrors of wars.

The monument was last re-gilded and restored nearly 25 years ago with much controversy over its brilliant golden color, so jarring at a time when conservation of public sculpture was still relatively unusual. Further, the shiny newness was in fact not what the sculptor had intended when he himself had it gilded originally: documents stated that he had toned the gold down. Since then, despite regular maintenance efforts, weathering and pigeons have worn away most of the gold.

In 2013, we were engaged by the Central Park Conservancy to clean and conserve the bronze in preparation for re-gilding and toning the sculpture. Following failed previous gilding removal, we performed ultra high-pressure (UHP) water jetting of the bronze surfaces. Surfaces were cleaned using specialized jetting nozzles under tight limits and controls to remove soluble salts that remained on the interior and exterior of the bronze. Tests showed that the technique was effective at reducing salts to a level below the international recognized standards for high performance coating systems without resulting in any damage to the bronze itself. Conservators also consulted with the client on the toning of the gold to ensure that Saint-Gaudens’ wishes for the proper appearance would again be met. 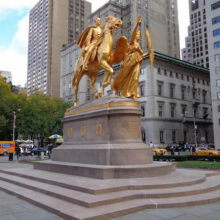 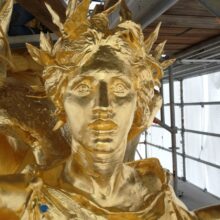 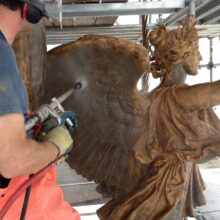 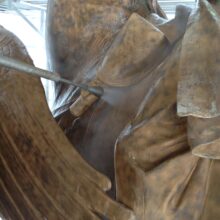 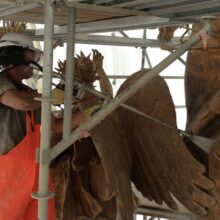