Saint Catharine’s Church was built from 1901 to 1902 in the Beaux Arts style of Italian Renaissance classicism. The church is adorned with impressive artwork and painted decoration. Gonippo Raggi, an accomplished Italian artist and church decorator, painted the majority of the murals between 1904 and 1928. Raggi collaborated with Chicago-based Celtic artist Thomas A. O’Shaugnessy on three murals. Painting in a Raphael-like style, Raggi spent almost thirty years on his magnum opus.

EverGreene was commissioned to embark on a restoration project of both the church’s interior and exterior. For the church’s centennial, EverGreene planned and performed the conservation of murals and the restoration of historic finishes, plaster, and decorative paint. The primary objective was to reinstate the decorative colors and design intent of the late 1920s when the original scheme was completed. Plaster was consolidated and repaired and paint matched and in-painted to cover losses. 23 karat gold was also reapplied. EverGreene completed this extensive project in 2006.

In December of 2017, the parish reconnected with EverGreene, noting some areas where water infiltration had caused damage. The mural above the Mary chapel was obscured by efflorescence and damaged plaster and paint loss. Areas in the upper chapel and Joseph chapel showed compromised, peeling paint. Our team treated the murals with a reversible varnish and painted in losses with reversible conservation colors. Additionally, a portion of the gold dome in the baptistery suffered from a leak and needed to be re-plastered and gilded. The gold and design were matched to the existing areas according to tone, color and sheen. Because the lunettes in the baptistery also suffered water infiltration, they were consolidated and reattached to the wall. The project also encompassed working on faux painted hanging tapestries in the upper chapel. A special film was used to repair the horizontal tears and reversible conservation paint was used to inpaint the film, so as to blend it in with the surrounding areas.

EverGreene emphasizes the endurance of our work and customer satisfaction. The opportunity to continue working with St. Catherine’s Church exemplifies the client’s trust in the quality of our product and service. 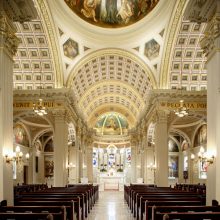 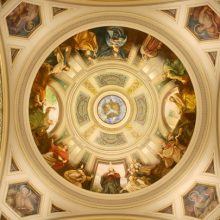 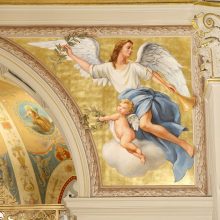 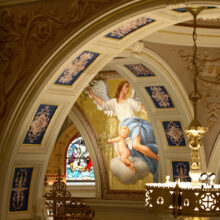 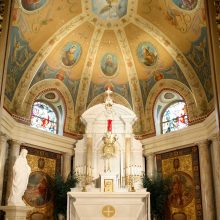 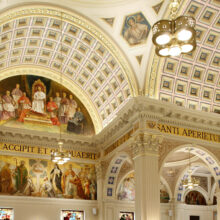 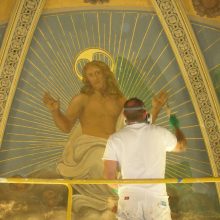 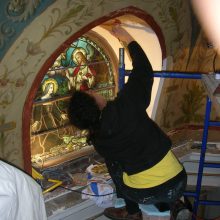