When the Astor family’s Knickerbocker Hotel closed during the Great Depression, its mural was moved to the King Cole Bar at the St. Regis New York. This created a legendary tradition in which, consistent across all the 46 St. Regis Hotels, unique murals are displayed above the bar counters.

EverGreene hand painted the Bar wall mural as well as two paintings at the Jazz Stage for the St. Regis Hotel in Macao, China. The backgrounds were laid in with aluminum metallic leaf, and tints and varnishes were applied to produce a traditional gold colored leaf. The mural and design elements were painted over and around the surface, with transparent and opaque glazing and layering to create depth and rich color effect.

The Bar wall mural depicts a lush vision of Macao in its heyday as a port city. It transports the viewer into frozen moments in time between 16th and 20th centuries. A crane, a Chinese symbol of eternity and youth, flies across a golden sky. Lotus flowers, emblematic of Macao, bloom in the water. Upon closer look, between the leaves, the Barcelos Rooster, armillary sphere, astrolabe and other navigational tools hearken back to Portuguese and British colonial presence. Layers of foliage hide historic landmarks; the Temple of A Ma (built 1488), the Guia Fortress (1622-1638), an incense altar from the Temple of Lin Fung (built 1592), and the Macao harbor, taken from an 1856 engraving in the background. 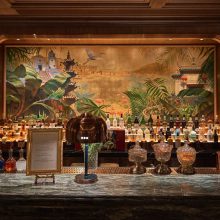 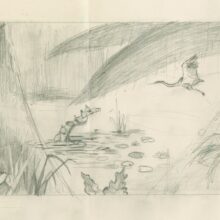 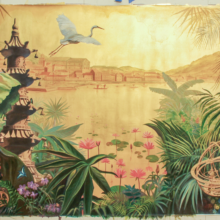 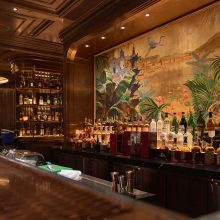 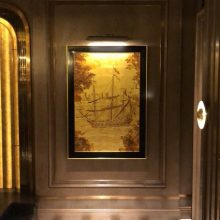 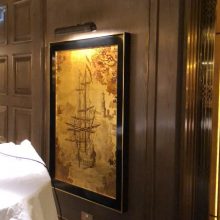