The Major General Sterling Price Monument memorializes Sterling Price, Confederate General and later governor of Missouri, and Confederate soldiers of Missouri. The monument, commissioned by The United Confederate Veterans of Missouri and The Daughters of The Confederacy of Missouri, was erected in 1901. It depicts Price Confederate uniform. The bronze statue by the Italian sculptor Gaetano Trentanove had been compromised by a corroding internal iron armature and mounting system, residual core material that was left in place after casting, and cracks in the bronze skin, especially where weep holes had been drilled in the boots.

The sculpture was removed and transported to a foundry to perform the necessary repairs, which included removal of core material and the replacement of the corroded iron armature with a stainless steel armature. Cracks and open seams in the bronze skin were welded and chased, and failed or inappropriate previous repairs were re-worked. The green, corroded bronze surface was chemically patinated to restore the sculpture to a dark statuary bronze color that was most likely the original finish. The sculpture was then coated with protective lacquer. The sculpture was re-installed on the granite plinth in March of 2014.

Treatment of the granite plinth included removal of disfiguring iron staining due to the iron elements within the bronze statue and repointing. 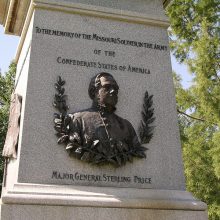 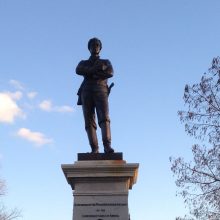 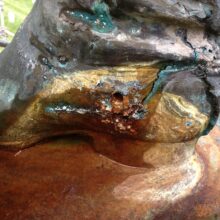 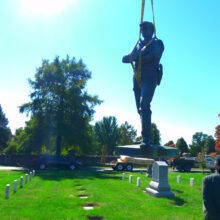 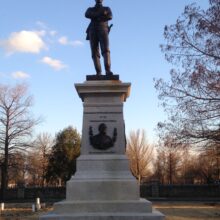