The pirate ship Whydah sank off the coast of Wellfleet, Cape Cod during a storm in April 26, 1717, less than two years after its launch from London, England in 1715. The vessel was originally launched as an English slave ship but in February 1717 it was captured by Samuel Bellamy (better known as Black Sam Bellamy) and his crew of pirates. In 1984, Barry Clifford discovered the shipwreck which included significant parts of the ship in addition to a treasure trove of artifacts. Many of these objects have since been excavated and this teakettle is an example of the day-to-day goods that were used by the pirates on the ship.

The kettle arrived at our studio stored in water with its spout detached. After X-radiography to examine the metal stability, the kettle was cleaned and desalinated by soaking in a series of buffered solutions. This was followed by a controlled drying process. Once dry, the kettle’s spout was reattached using a conservation adhesive and the join was filled and inpainted to match the surrounding material. Finally the teakettle was consolidant and coated to provide additional stability.

This process retained original materials and enabled the teakettle to be stored and displayed dry in a controlled environment to minimize further corrosion. 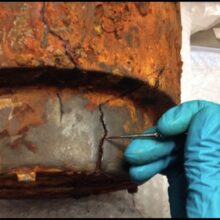 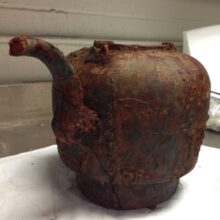 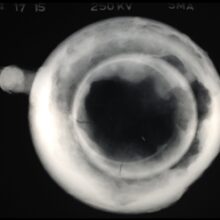