The Tennessee Theatre was designed by the architecture firm Graven and Mayger in 1928.

Experiencing the Tennessee Theatre is mesmerizing. The theater is more than just the stunning visual details and beautiful blue dome. As a part of a $23M renovation in 2003, the stage was expanded, a state-of-the-art sound system was installed, and modern acoustics and technology were incorporated.

Based on the findings of our investigation and conservation testing, our designers developed a historically accurate color palette and provided renderings to assist the restoration architects Westlake, Reed and Leskosky, with the decision making. Decisions EverGreene was involved with included the carpeting, seat colors and other soft goods aspects of the theater design and decoration. Then, our craftsmen began cleaning, repairing, and repainting. EverGreene’s scope further included a paint study, plasterwork, extensive stenciling, acoustic plaster, painted stage drapery, scagliola, glazing, gilding and other decorative painting techniques. EverGreene also painted the drapery in both the auditorium and in the corridors.

We subsequently returned to the theater to perform retrofitting maintenance work. Now, the Tennessee looks similar to its 1920’s design, but performs like a modern 2000’s theater. 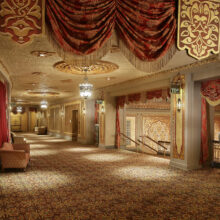 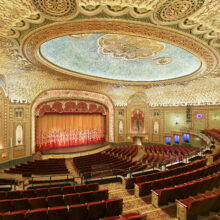 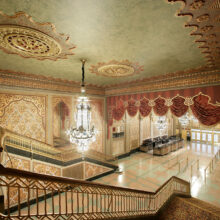