The Olympia Theatre at the Gusman Center for the Performing Arts owes its distinctively Moorish character to renowned atmospheric theater architect John Eberson. EverGreene has worked on many of Eberson’s opulent atmospheric theatres over our 40+years in business. When it first opened in 1926 as a silent movie palace, Miamians were amazed by its exotic courtyard, the ornate towers and sculptures, and brilliantly colored plaster and tile. This vaudeville showplace evolved into a movie theatre in 1954, and then closed its doors in 1971.

EverGreene has worked on the Olympia over many years, and on multiple projects. We restored the lobbies in two phases and later on restored the auditorium to return it to John Eberson’s original design.  EverGreene plasterers studied the original building plans and archival photographs, documenting the decorative scheme before cleaning the entire auditorium, removing non-historic attachments, and replicating and replacing what was beyond repair.  EverGreene decorative painters custom-mixed the paint to achieve just the right purple-blue color for the ceiling. This signature night-sky color for Eberson’s atmospheric theatres is a dead matte paint that absorbs light. Having worked on many of Eberson’s atmospheric theatres, we were able to interpret the results of the microscopic paint analysis, and determine a complex layering of polychroming, glazing, and opaque dry brushing to was required to achieve the original effect. We also produced samples for each decorative element throughout the auditorium, which were reviewed and approved by the client before decoratively painting the entire auditorium.

The end result has returned this quintessential atmospheric theatre to its original splendor and ensured that it can be enjoyed by theatre lovers of all ages for decades to come. 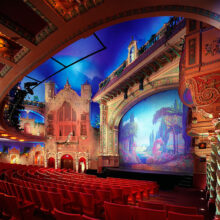 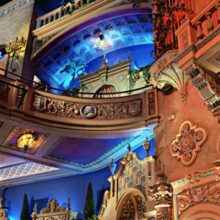 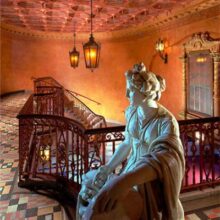 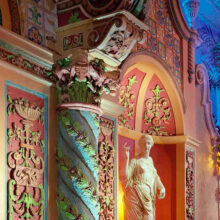 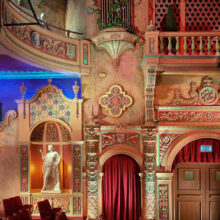