Louis Comfort Tiffany’s home at Laurelton Hall, was built between 1902 and 1905 to showcase his studio’s decorative arts and his unique eclectic design sensibilities. Integrating all of the designer’s talents, it included not only his signature stained glass windows but wood, metal, mosaic and stone productions from his studios and his personal collections. The artist created many unique works specifically for the house, including a marble faced fireplace with glass mosaic clock faces that told the date, day, and time.

Tragically, the house was destroyed by a fire in March 1957. Hugh F. McKean, the first Director of the Charles Hosmer Morse Museum of American Art, who had studied at Laurelton Hall as a young man, managed to collect what could be salvaged from the ruins including the marble fireplace. Several large stone panels had been damaged both in the fire and during salvage and the mosaics had lost approximately 20% of their tesserae. In preparation for an exhibition on the house at the Metropolitan Museum of Art, we were contracted to restore and reconstruct the fireplace.

Historic photographs were studied to determine the original design of the mosaics. Failed repairs were reversed and a new hidden structural mounting system was fabricated. Replicas for the missing tesserae were created from painted Komatex and photographic reproductions. These were carefully set into the restored marble and new hands were created to complete the work. 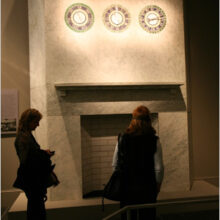 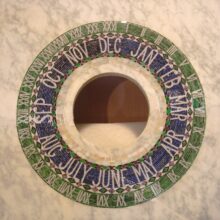 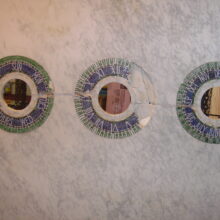 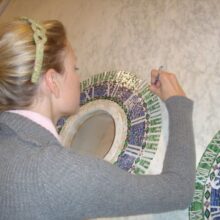 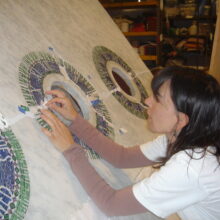