The Knoxville National Cemetery was established in 1863 by famed Civil War General Ambrose Burnside. The most notable monument on-site is the Union Soldiers Monument. The original monument, completed in 1901, was sadly destroyed by lighting in 1904, but was re-built through diligent fund-raising and construction efforts by 1906. Today, the Union Soldiers Monument stands 60 feet tall, built of local gray-pink Tennessee marble in a Gothic Revival style.

After over a century of exposure, the monument was beginning to show signs of deterioration. The existing roofs were failing, allowing destructive moisture to enter the monument. Existing mortar was cracking or the joints open entirely. Atmospheric soiling and thick mineral crusts had accumulated on stone surfaces. Cracks and dimensional losses had developed in the marble.

In 2009, we were contracted to conserve this monument. Atmospheric and biological soiling was removed through detergent washing and water rinsing. Cracked and open joints were pointed using a custom color mixed mortar. Areas of stone loss were repaired through composite patching or by installing a dutchman of matching stone stock. Metal elements were blast-cleaned of rust and re-coated with a high-performance coating. New EPDM roofing installed to prevent recurring moisture infiltration. The stone tile floor was re-honed to remove deposits, successfully restoring the clarity of color and design to the vault floor. 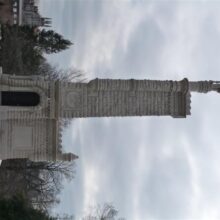 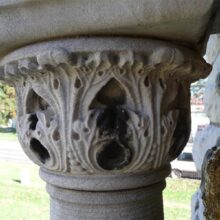 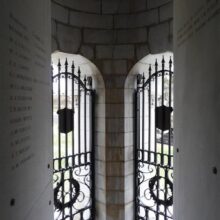 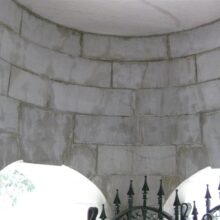