Unity Temple, the work of master architect Frank Lloyd Wright and considered to be one of the most important and influential buildings of the 20th century, underwent an extensive $25M restoration and renovation beginning in 2015. The Temple re-opened in summer 2017.

EverGreene conservators and craftsmen restored the interior finishes. The finishes were analyzed and it was determined that the original sand plaster was an integral component of the final appearance because of the transparency of the paint. EverGreene identified a sand that matched the original and produced mock-ups using a recipe determined by the analysis. Paint removal tests determined that the original surfaces could not be uncovered to produce accurate samples of historic paint finishes. Instead, the plaster was skim coated and new plaster was applied to replicate the historic paint finishes. 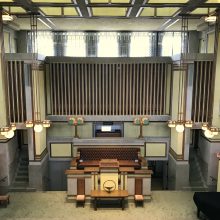 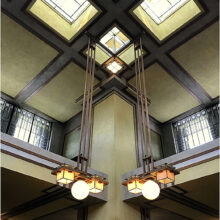 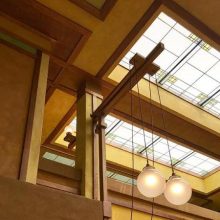 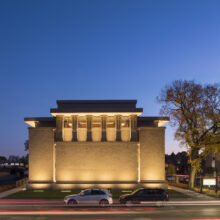