The Fairwater Sail is from the Submarine USS Balao (SS-285). The USS Balao served as the lead United States Navy Balao-class submarine during World War II. The sub was launched October 27, 1942 and lastdecommissioned July 11, 1963. On a submarine, the sail is the tower-like structure on the dorsal surface. Underwater the sail acts as a vertical stabilizer. Above water, it serves as a navigation bridge for the Officer of the Deck and platforms for anti-aircraft guns.

In 2015, we conducted a conditions assessment for the Naval History and Heritage Command (NHHC) curators. Treatment was planned and carried out in 2016.

Teak decking and name plaques were transported to us’s off-site facility for treatment while scaffolding was erected around the sail structure. Existing coatings and corrosion products were removed using ultra-high pressure waterjetting. Once a clean and stable surface was achieved, the sail’s numerous steel elements were primed and painted with standard United States Navy colors. The aluminum periscope shears were cleaned and corrosion removed. The decking was stripped of failed coating remnants, treated with teak oil, and reinstalled with new and restored fasteners. Threeacrylic covers were installed to discourage visitors from entering the object. Failed coatings were removed from the commemorative plaque, the battle flag in-painted, and a lacquer finish applied to all surfaces. A new staircase and lockable gate were fabricated and installed to meet current safety standards. Afterwards, we provided maintenance recommendations for all treated areas and elements. 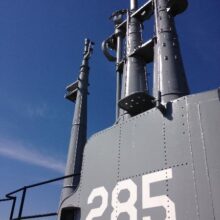 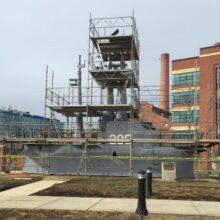 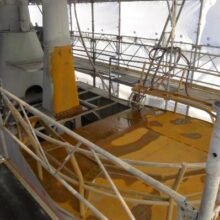 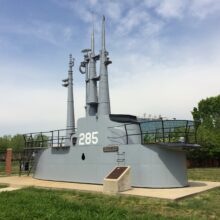 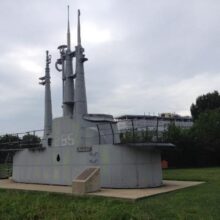