During a multi-year contract to treat all of the outdoor sculpture at Vizcaya Museum and Gardens, we conserved approximately forty monumental columns along the “statuary walks” of the estate. Some of these columns were imported from Europe, while others were custom-made pieces crafted locally from native coral stone. The columns are topped with Italian marble busts or urns. The columns comprise a large and significant portion of the outdoor sculpture collection, together with numerous architectural fragments, antique relics, and Baroque statuary.

A careful assessment was performed of each individual column and a comprehensive treatment program was developed for each with input and feedback from the curatorial staff. Issues of structural stability and life safety were considered to be of paramount importance. Many of the coral stone columns had been badly damaged by hurricanes; some had been fractured into three or four segments. The columns were typically stabilized with a grouted anchor that runs the full height of the column and ties it to the plinth; surface losses were rebuilt using patching mortar and textured to match the unique and porous stone surface. Several columns were found to be so deteriorated that they warranted replacement in kind. The associated bust or urn was also dismounted, iron pins removed, reassembled as needed, conserved and remounted.

A particularly challenging effort was the restoration of various brecciated and highly figured marble columns. Many of these exhibited significant dimensional losses, which developed as the unique stone matrix disaggregated and fractured. Previous repairs using colored mortars were not visually or materially satisfactory. After performing structural pinning of the columns as needed, the losses were cleaned of failed and inappropriate previous repairs and filled using a combination of marble mosaic and terrazzo techniques. A broad palette of marbles whose colors matched those of the original multi-colored stone was assembled for this purpose. Larger losses were filled with stone tesserae cut specifically to size and shape, while smaller losses could be filled with crushed stones laid into a colored mortar mix. Once set in place, the patches were honed with fine diamond abrasives to shape them to match the contours of the column. 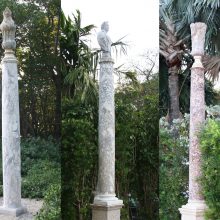 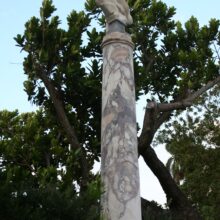 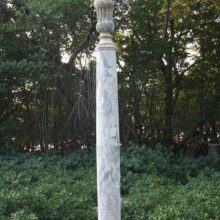 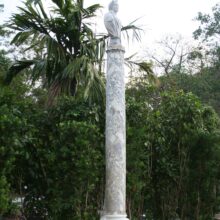 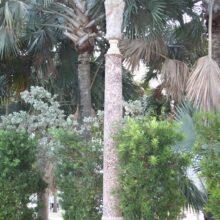 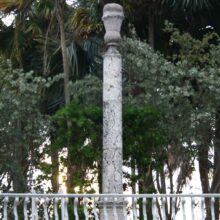