The Warner Theatre in Erie, Pennsylvania opened its doors on April 10, 1931. Eight thousand colored lights illuminated the ten-ton marquee that announced the feature film of that opening evening. The theater presented movies and stage shows for several decades. However, with the ultimate decline of downtown movie houses, the Warner transformed itself into a performing arts venue.

We conserved the decorative metal and cast stone of the Warner Theatre. We performed mock-up samples for the client in order to replicate the original finishes. All railings and the front entrance doors were cleaned, polished, spot repatinated, and coated with a tinted lacquer. In addition, damaged areas of the railings were straightened and loose sections were re-anchored. Mock-up samples were performed on the historic kiosk, ventilation grilles and poster frames.

Once approval was given by the Architect, these components were cleaned and coated with a tinted lacquer. The heavily deteriorated picture frames were partially disassembled and the points of attachment were inspected and repaired. The cast stone was conserved at the main entrance. This work involved the removal of multiple layers of paint, patching of damaged areas, and the complete repointing of the entrance. 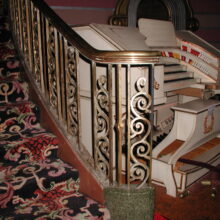 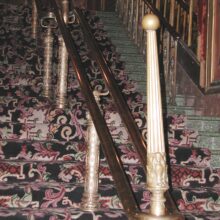