The American Horticultural Society has its headquarters at River Farm on the Potomac River, one of George Washington’s original “Five Farms” near Mount Vernon. Found on the property when the organization acquired it in 1973 was a set of original wrought and cast iron gates from the White House. These had been installed in1819 as part of the reconstruction after the War of 1812. They were in use for more than 120 years before being removed. A replica of the design remains in use at the White House to this day.

The ironwork gates had deteriorated over their long service life both during storage and while at the White House. Elements were bent and deformed from rust jacking and some pickets were missing. Hardware was missing or had been replaced with inappropriate modern units. Fourteen layers of paint covered the finely formed ironwork and the existing color did not match the original deep forest green.

In 2005, our conservators were contracted to study the gates, perform paint analysis to determine the original color, recommend, design, and oversee the conservation treatment to restore them to their original appearance. Micrographic stratigraphy was performed to identify the original finish paint color and drawings were made of the gates to direct the work and document the addition of new elements. Specifications for treatment and recoating were prepared and the work was performed by others but overseen by us. The gates were then exhibited before being permanently installed at the River Farm site. 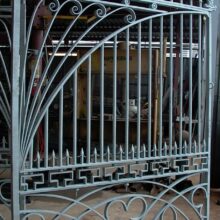 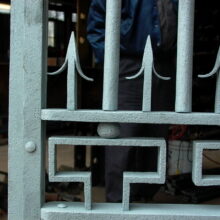 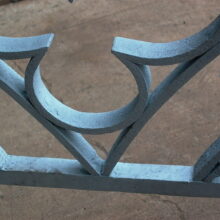