The Confederate Monument memorializes those who served in the Civil War from this historic port city. The monument features four zinc figures depicting each of the armed services mounted around a granite obelisk. The figures represent Infantry, Artillery, Navy, and Cavalry.

Although generally in good condition, each had suffered some deterioration through losses, age and vandalism. The original saber that Cavalry once held had been replaced with an iron replica, which deposited rust on the zinc plinth. Artillery’s swab had split and become loose and other small failures had occurred on each figure. In addition, a graffiti assault had left paint stains on the sculptures’ faces.

In 2006, we were contracted to conserve the figures. Each was cleaned of soiling, excessive surface oxidation and remnant paint using controlled and careful cleaning methods. Iron stains were removed by chelating agents. A new saber was fashioned from aircraft grade aluminum to match the lost original and mounted on the figure. A stainless steel support was formed and mounted behind the swab. Small cracks and losses were filled with a bonded metal and the figures were chemically re-patinated to formulate a consistent tone. 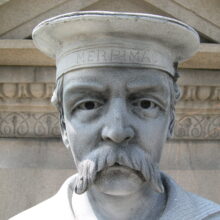 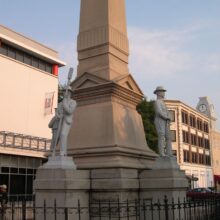 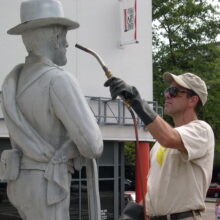 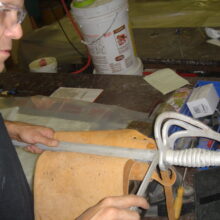 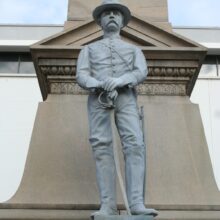 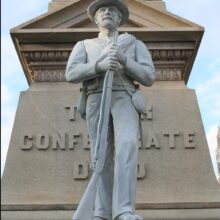